I was ready to publish this post about my latest make, SOI’s Nancy Dress, two weeks and a half ago. But on the day I planned to post it, I instead ended up in the hospital requiring emergency surgery. I’ve been recovering since then and am now starting to feel much better. But it’s been a tough couple of weeks and I thought it might be therapeutic to include a bit of a life update in my original Nancy Dress post. Feel free to skip the following italicized paragraph if you’d prefer to go straight to the making of the Nancy Dress 🙂

Life update. On February 4th, we were thrilled to find out that we were expecting our first child-to-be! But over the weeks that followed, I had a recurring feeling that something just wasn’t right. I wouldn’t say I’m particularly ‘in tune’ with my body, and I don’t think that I’m pessimistic or a hypochondriac, but for some reason I just couldn’t convince myself that everything was fine. Matthew advised that I try to relax, that the only real negative symptoms I had–the odd spotting–were not uncommon. Furthermore, my doctor was confident that my hCG levels (pregnancy hormone) were fine and indicated a normally developing pregnancy. Things changed slightly on February 20th, when I started having sharp pains in my lower back, but the doctor said this was normal at this point in the pregnancy. Things changed significantly on February 24, however. The pains increased considerably and I began to bleed. This began as we were about hit the road towards Chicago to see Noel Gallagher, so we decided to stop at the clinic on our way out of Madison. The clinic doctor immediately sent us to the hospital for an ultrasound to determine if I was in the midst of a miscarriage. But the results revealed something different. The fetus had a heartbeat and was developing, but it was developing in my right Fallopian tube, not the uterus. This is called an ectopic pregnancy, and ectopic pregnancies are not viable. Furthermore, they threaten the woman’s health because they can burst the Fallopian tube itself if they grow too large, causing severe internal bleeding. Considering the size of our fetus and the fact that I had some fluid in my abdomen, they performed an emergency surgery to remove the pregnancy and my fallopian tube. It was tough. We lost our baby, and I lost a part of my fertility. Heartbreaking and scary. But it could have been worse. I’m thankful for the amazing care I received at Meriter’s hospital in Madison. I was met with an incredible team of professionals. They were extremely reactive and demonstrated some genuine empathy and compassion. I’m also thankful for my husband, who was by my side the whole time and who’s been patient and helpful during my recovery. It’s been emotionally difficult for us, but I feel that this experience has brought us closer to one another. Why share this experience on my blog? First, we had yet to announce that we were expecting. It might sound strange but I feel that it wouldn’t be fair to this baby (or embryo/fetus/pregnancy, whichever you prefer) to not acknowledge them and to go on with our lives like they never happened. It’s heartbreaking that they didn’t implant in the right place and that, as a result, we will never get to meet them. But at some point, they were there and they had a beating heart. They will always be our first child-to-be, and I’d like it to be known that they were there. Second, if any woman reading this experiences similarly indescribable feelings when pregnant, something that just doesn’t feel right, have it checked. You know best. Symptoms can be tricky to interpret in early pregnancy. If your doctor doesn’t seem concerned, you should of course trust their expertise, but if the feelings persist, consider requesting an early ultrasound. Ectopic pregnancies can be overlooked because they are relatively rare (1 to 2%) and their early symptoms are similar to those of a regular-developing early pregnancy. But they can be life-threatening, so don’t ignore the symptoms! Mine were sharp pains in my lower back, occasional lightheadedness, vaginal light bleeding (which started brown and then turned red) and, by the day of my surgery, dull pains on my right side (where my ectopic pregnancy was) that radiated into my leg. From reading other women’s experiences, it seems like the symptoms and the intensity of the pain can vary from person to person. So again, if you feel that something isn’t right, my advice is to see your doc about it. It may end up being nothing, but better safe than sorry!

Now, back to sewing. Not sure how to properly transition to the making of the dress so I’ll just get to it. The pattern is The Nancy dress by Sew Over It. I find this dress to be the perfect combination of cuteness and comfort.

I love the balance between the shape of the bust/shoulder area and the loose-fitted skirt. The front side panels are such clever pieces, providing a swing effect without adding extra volume to the front. The trickiest part for me was to stitch these side panels to the front into corner seams. But I followed SOI’s super clear instructions and I marked the stitch lines in advance, which helped a lot. Once pressed, I was pleasantly surprised by myself with how good these corner seams looked!

Other features of this dress include three-quarter-length sleeves and a bias-bound neckline. I chose to make the high neck version. Also, I was happy to find that it didn’t require a zip – I love not having to install a zip! Instead, the dress has a closing with a hook and eye.

The fabric is a poly crepe de chine (I think). It has a little shine to it and drapes nicely. The paisley print fits with the dress’ 1960s swinging London style. It reminds me of the iconic babydoll dresses of that era. For a complete look, I’m pairing it with a cute pair of purple Mary Janes that recently revealed themselves at Milwaukee vintage shop.

And now some pictures: 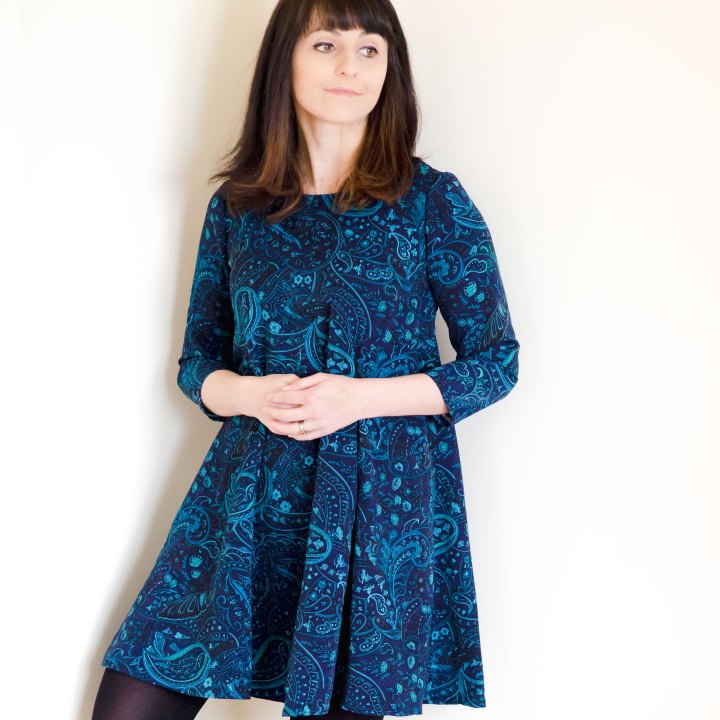 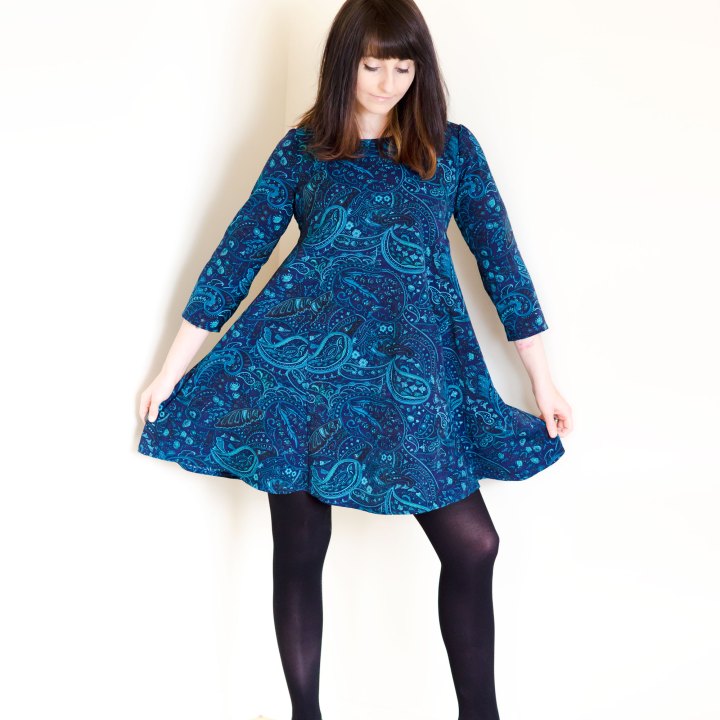 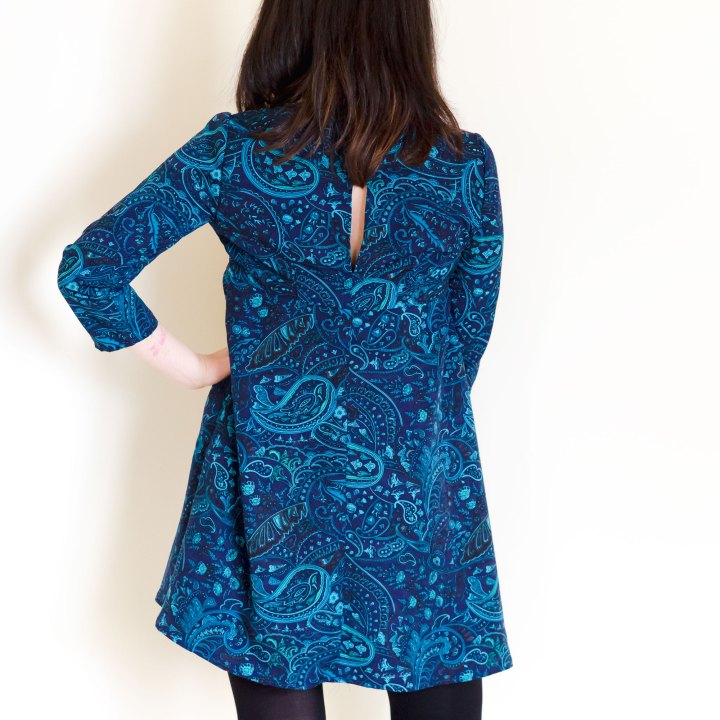 Hi, I’m Emmanuelle. I’m a French Canadian seamstress in Montréal. I love sewing, fitting, designing fabric prints or hunting down the grooviest 1960’s florals. (I’m a bit of fabric nerd!) The purpose of this blog is to document my personal sewing journey. Hope you like it!

Wanna chat about sewing? Send me an email at emmanuelle@zoubizoubisou.com